The cooperative company, one of the most important in the Italian food large-scale retail channel, has opened a new hypermarket in Parma, Italy, obtained from the complete renovation of a prefabricated industrial building.

Torreggiani & C. installed the entire network of thermo-hydraulic systems —summer and winter air conditioning systems, water systems for the distribution of hot and cold water, an air extraction system for food processing and cooking areas and the fire prevention system. All this in record time, taking advantage of the month of August, when the flow of customers is reduced, arranging several daily shifts and allowing to keep the store partially operational.

Water production. The heating plant is fed by the city’s district heating network, which ensures that the production of hot water — both for heating and healthcare use — is supplied by a renewable source. In particular, the production of domestic hot water is completely free — the water, contained in specially sized tanks, is kept warm thanks to the recovery of hot gases from the refrigeration circuit of the hypermarket’s refrigerated counters. The chilled water for the air conditioning systems is produced by a high-efficiency refrigeration unit which, connected to the same hydraulic circuits as the heating network, supplies the terminal units.

Air conditioning. Both summer and winter, it is of the all-air type. The handling units are equipped with a “free-cooling” function which is activated when the outdoor temperature is lower than the indoor one, thus allowing to take advantage of the outdoor air as a free source of cooling. The diffusers, placed flush with the false ceiling, have a high induction helical effect.

Fire prevention system. It is connected to an underground water reservoir, the volume of which ensures water availability in accordance with the requirements set out by the regulations in force. The water high-pressure pumps guarantee the delivery of the design flow rates.

One of the largest and most representative Conad stores in the city of Reggio Emilia, Italy. With the aim of achieving greater energy savings, Torreggiani & C. installed in this building an all-air summer and winter air conditioning system with “plug and play” roof-top units that, besides having heating and air conditioning functions, are also equipped with a free-cooling function. When the outdoor temperature is lower than the indoor temperature, this option allows the outside air itself to be used as a free source of cooling.

A complex study was carried out for the construction of the network of ducts for the introduction of the handled air into the environment — these are circular ducts, painted with epoxy powders and equipped with diffusers with variable wing profile for an effective air diffusion according to the ambient temperature and the internal exothermic sources.

The company also worked on the technological systems for the safety of the underground garage. The area, in fact, has been protected against:
– Risk of flooding: thanks to an articulated network of pipelines, rainwater flows into special tanks positioned at crucial collection points, equipped with backup pumping stations with control panels and acoustic and visual alarms
– Risk of fire: an underground water reserve station has been installed, combined with water overpressure pumps with electric motors and endothermic diesel-powered combustion engines, to guarantee service supply even in the event of a black-out. A system with automatic sprinklers preserves both the collapse of the floor and the extinguishing of fire on the ground, while a hydrant system allows manual fire extinguishing
– Risk of concentration of combustion gases: high-capacity air extractors have been positioned in specifically designed technical areas and have been connected to several ventilation systems with circular ducts equipped with steel grids for the quick and effective extraction of polluting and explosive residues.

The point of sale in Scandiano has been equipped with a full-air conditioning system for the sales area and cassette fan coils for the processing areas. This intervention is characterized by the design of a complex technological plant that has made it possible to increase the overall efficiency of the system by exploiting a higher percentage of the heating power of the fuel.
The plant, in fact, is essentially made up of three co-generators running on methane gas that produce heat and electricity at the same time. The heat produced is entirely recovered and channeled to the building’s thermal system for heating the rooms and generating hot water.

In turn, the excess hot water feeds an absorption refrigeration unit, cooled by a cooling tower which— due to the change of state of the refrigerant fluid generated in combination with a lithium bromide solution — produces the chilled water necessary for the building’s air conditioning. 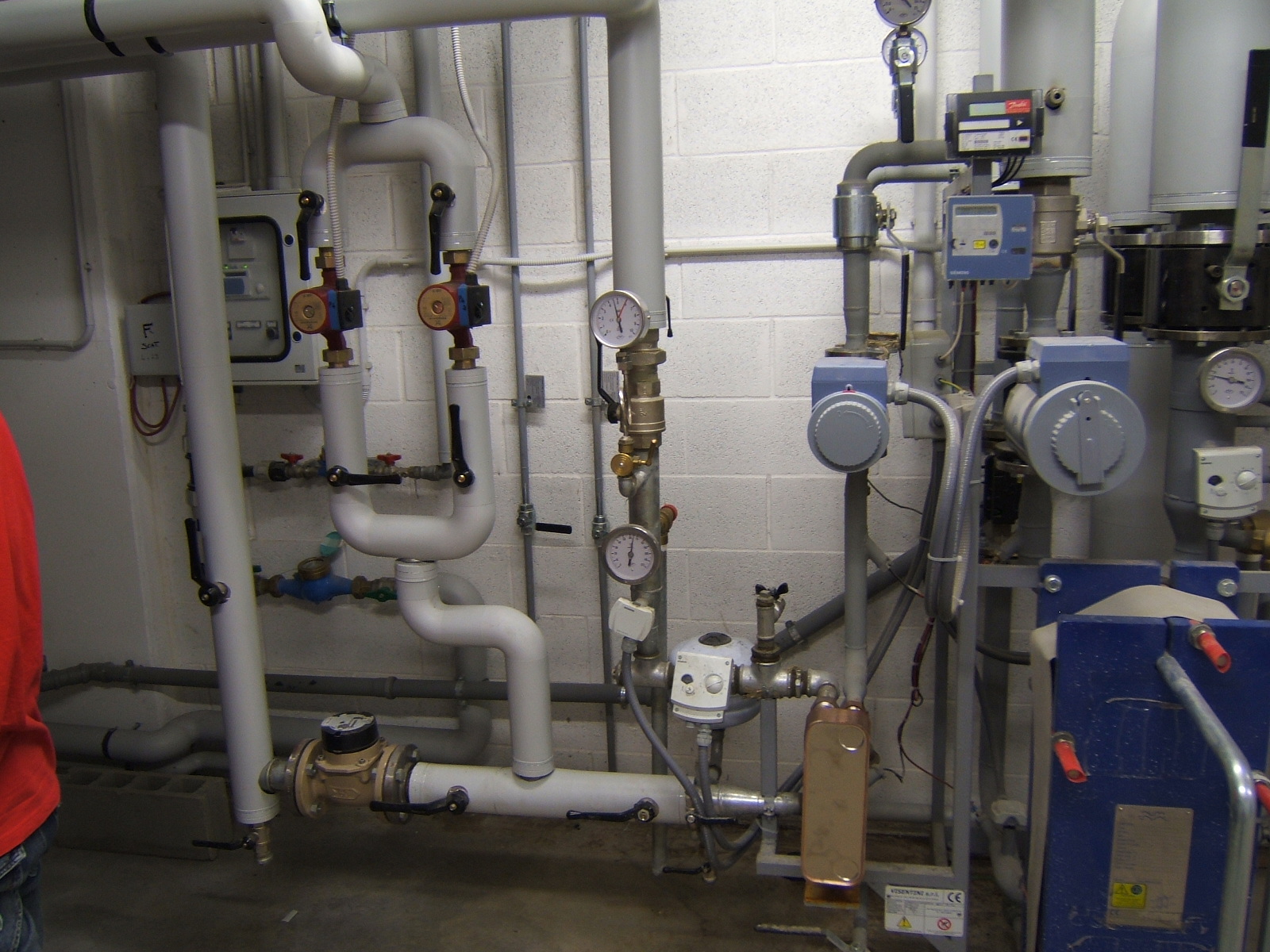 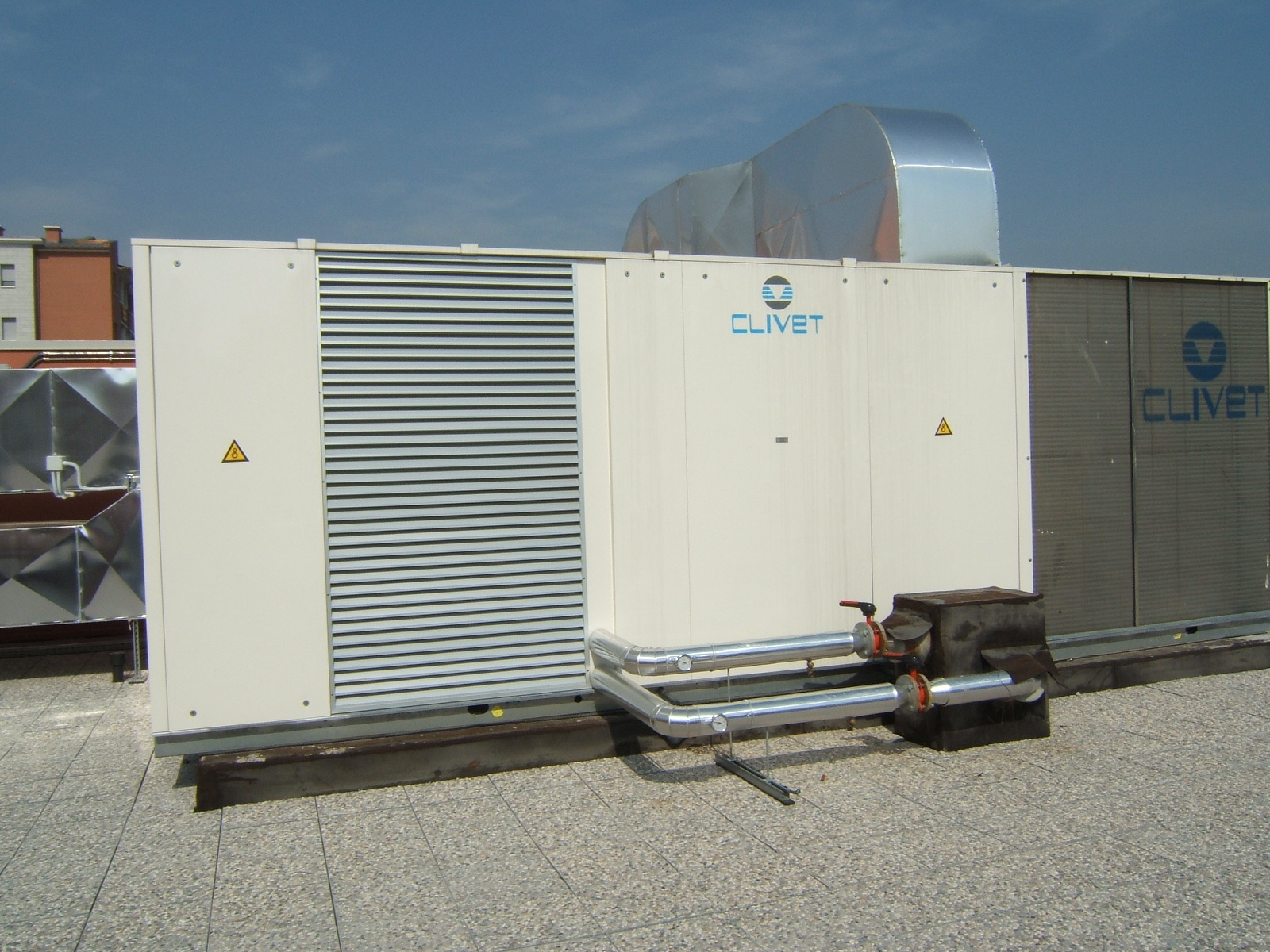